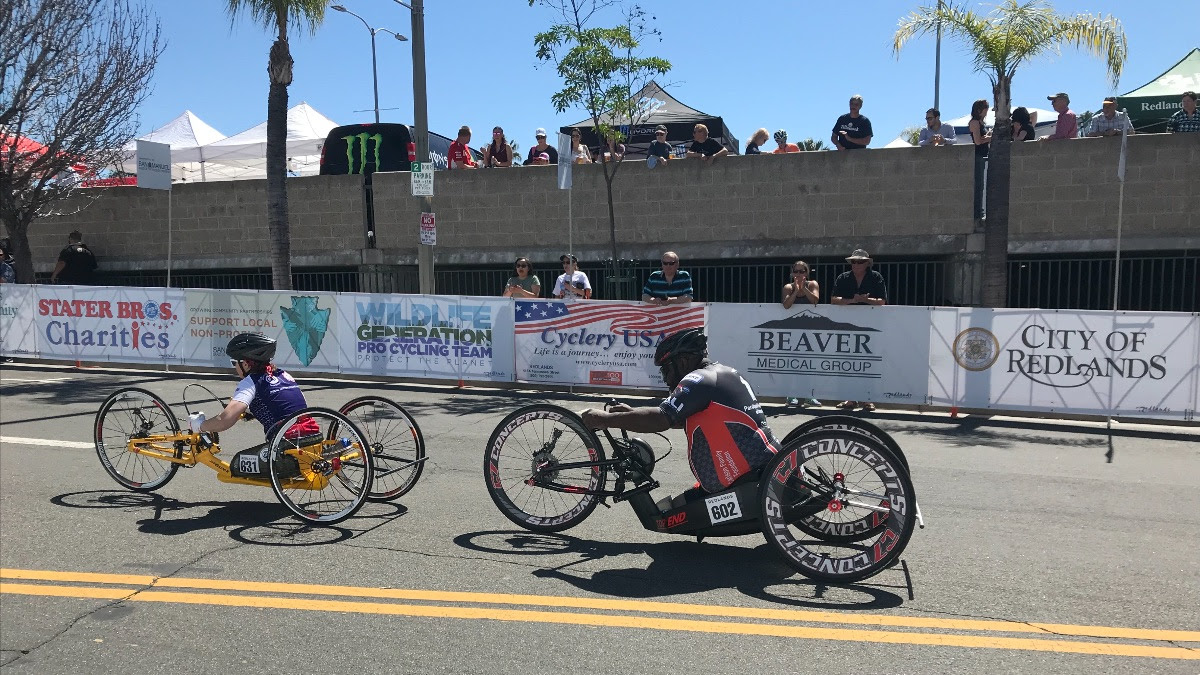 Two men in the H3 category, Ryan Pinney and David Randall, both racing for Paralyzed Veterans of America Racing, took the lead over the 45-minute race. As in the previous day’s road race, the lap count for the entire field was based on the race leaders, which means Pinney and Randall set the lap count.

Working together, the duo increased their lead over the rest of the field. Pinney opened a gap on his breakaway companion with five laps to go. Randal managed to catch Pinney on the next lap, but in the end, Pinney pulled ahead to take the win by 4 seconds.

Speaking to press at the finish, Pinny shared he was glad for the competitive field and a chance to build his fitness on the Redlands course, as he sets his sights on the Tokyo 2020 Paralympic games.

First time Redlands racer and new to competitive para-cycling, Lera Doederlein of Nexus Endurance/Challenged Athletes Foundation (women’s H5), was the field’s youngest rider at age 15. Doederlein told reporters that even though she has not raced for long, she really enjoyed the day’s race and is looking forward to tomorrow’s final leg. She pushed through 10 laps along with Solomon Revils of Paralyzed Veterans of America Racing, men’s H5 category, who provided encouragement to the younger competitor throughout the race.

Many cyclists decided to work together to increase their speed, forming long draft lines to conserve energy and share the workload. Bruce Kuker (Paralyzed Veterans of America Racing) came in first place in today’s recumbent category.

“The race was nice! We were out there drafting and I tried to get out there in the front and pull some weight, it’s not right to just hang in the back,” Kuker said. “I got on a train and stayed there for awhile, it makes a heck of a difference!”

On a tight, 9-turn criterium, racers cornering skills were critical to their overall time on the course. Fields including elite Paralympic athletes from all over the country, it was little wonder that the times on the course were scorching. Racing will conclude Sunday, with a 30-minute criterium on the same course, starting at 3:05 pm.

Follow our free LIVE stream presented by Wildlife Generation Pro Cycling and CycleStream.TV, beginning at 9:30 a.m. through to the finale of the pro men and women races.